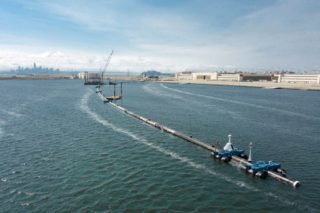 A floating U-shaped barrier, 600 meters long, has been deployed from San Francisco to combat the Great Pacific Garbage Patch. A 3-meter-deep screen beneath the boom traps floating plastics and allows fish to swim safely underneath. The boom constantly transmits its location and sensor information, when these indicate it is ready a support vessel collects the amassed rubbish and transports it back to land for recycling.

The device’s creator hopes that if it is successful, it will become the first of a fleet aiming to clean up half the Great Pacific Garbage Patch within 5 years. The barrier deployed from San Francisco is one of many ocean clean-up efforts worldwide as more people recognize how urgent the need is and act. Closer to home we have the Shruder device developed in Coffs Harbour, which attracted the attention of Prince Charles.

The Great Pacific Garbage Patch – now almost the size of Queensland – contains plastics from as far back as the 1960s and grows steadily as roughly 8 million tonnes of plastic enter the ocean each year. Part of the solution has to be prevention and education, and there are people working hard to make progress in these areas too – such as the War on Waste documentary which has taken Australia by storm. While the big thinkers’ educate and build though, we are the people who hold the most power to change this. Finding ways to use less plastic and recycling what we do use is the only long-term solution to this problem.

BEC are intentional about reducing and recycling what we use in the little things (like our office coffee machine) and bigger things, like our probono time investment towards sustainable projects & initiatives.